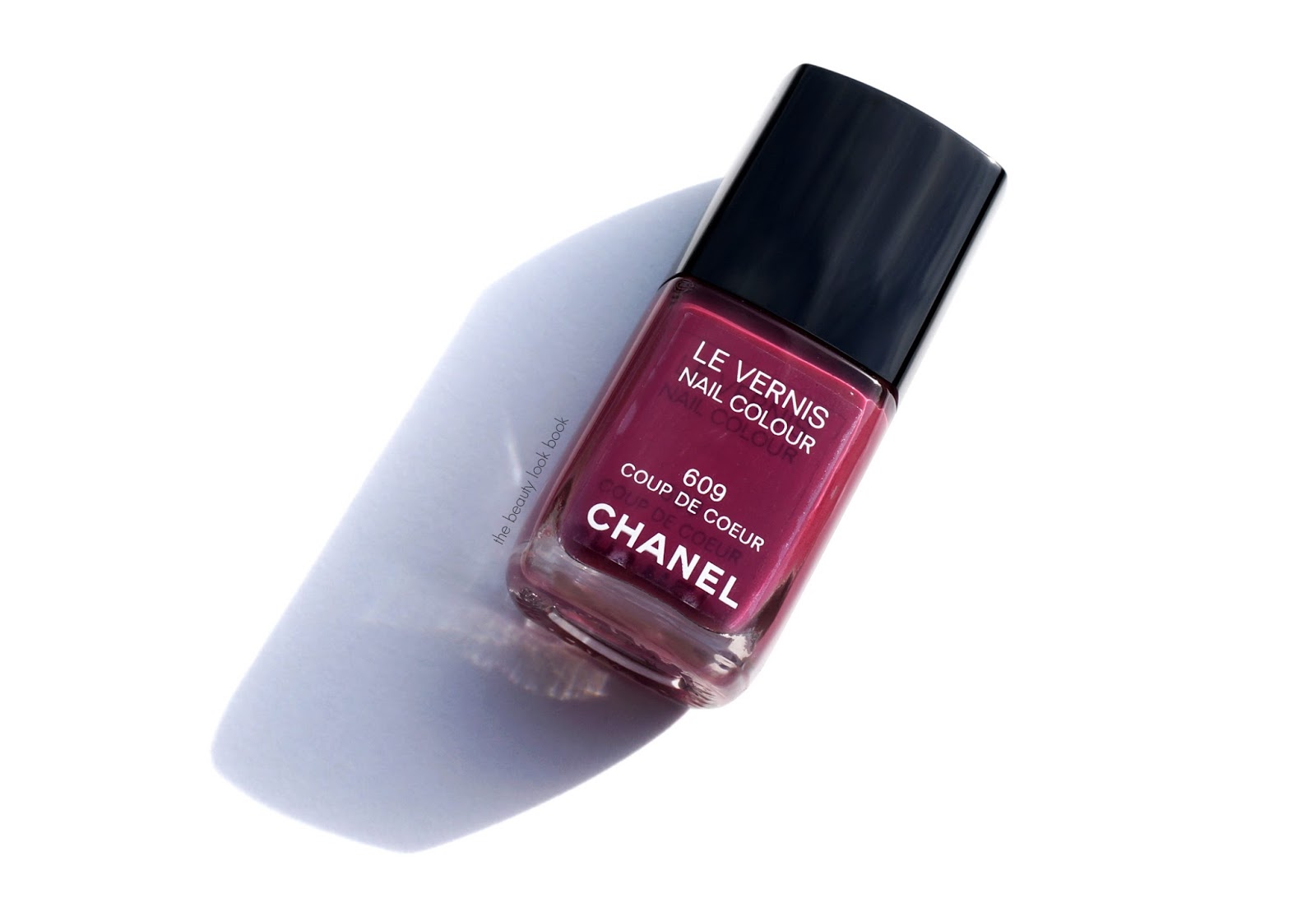 Chanel just released a small collection focused on lips and nails. I spotted a new tester unit of the collection at Nordstrom this past weekend and was excited to try the new lip colors, however many of the slots for lips had colors that were from spring and previous collections. The counter rep did not know which ones were supposed to be featured with this collection stating all the colors in this set were repromotes. This turned out to be partially true – for a full list of what’s in the Variation Collection check out Specktra.net. I left the counter with two glossimers (swatches later this week) and the new nail lacquer in Coup de Coeur #609 ($27 for 13 ml/0.4 fl oz).
Coup de Coeur #609 is described as a lacquered plum. It’s just that – however it proved to be challenging to photograph. It has quite a bit of red mixed into the color but on the nails and in real life it’s a purply-plum shade. In sunlight and on the camera it wants to look more red – which is why you may see it look very different in reviews or message boards. To my eye it looks more like a mauve plum with a very slight hint of red. 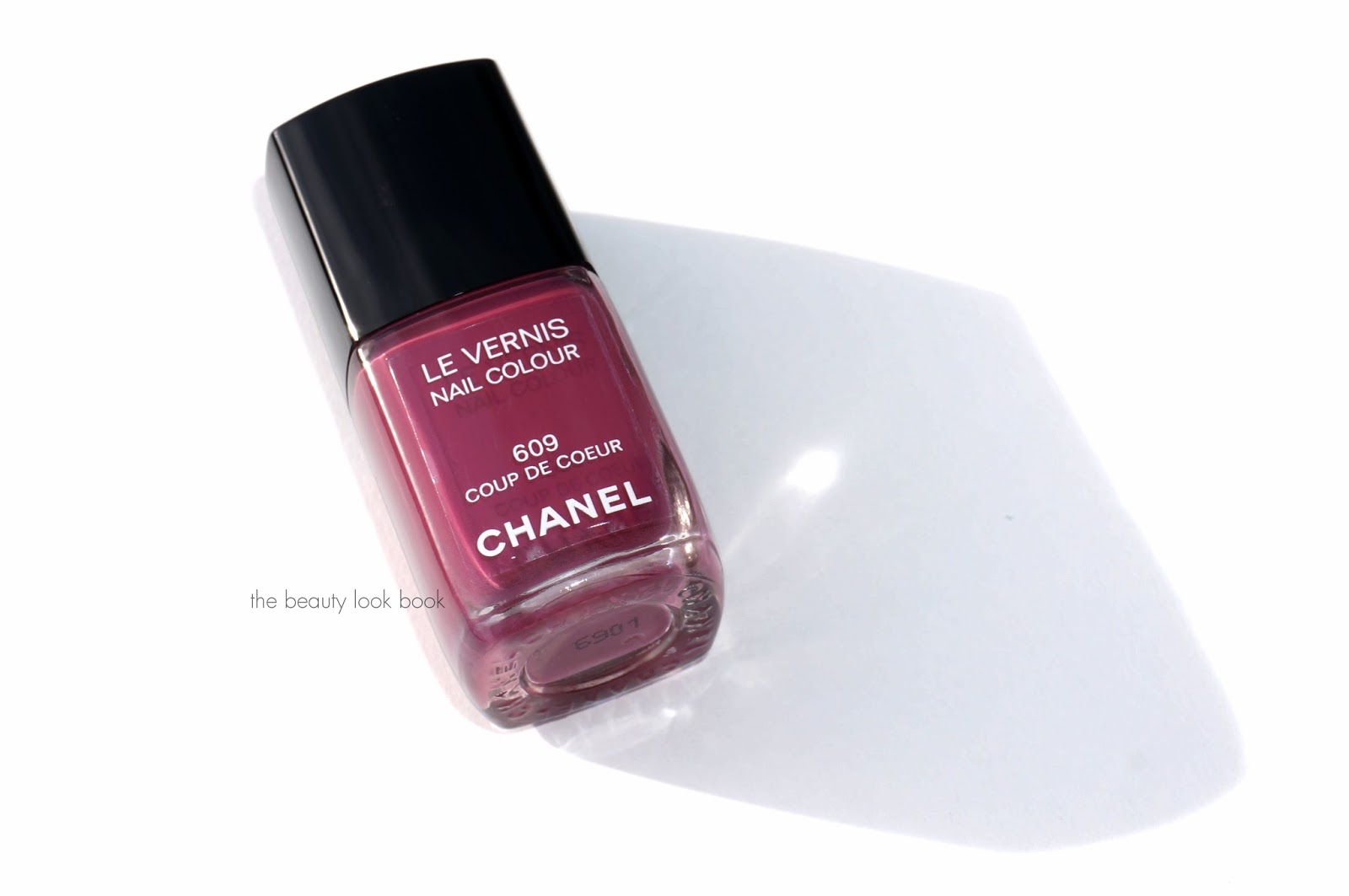 Coup de Coeur #609 applied very smoothly with full coverage after two coats. It has a high shine finish like most Chanel nail colors. It’s a classic shade that I think will be universally flattering.
Here it is with two coats. I used Deborah Lippmann Rehydrating Base Coat and Rescue Beauty Lounge Top Coat to finish. The photos below show the complexity of Coup de Coeur – in some light it looks more red, others it’s more plum, and yet others more mauve. 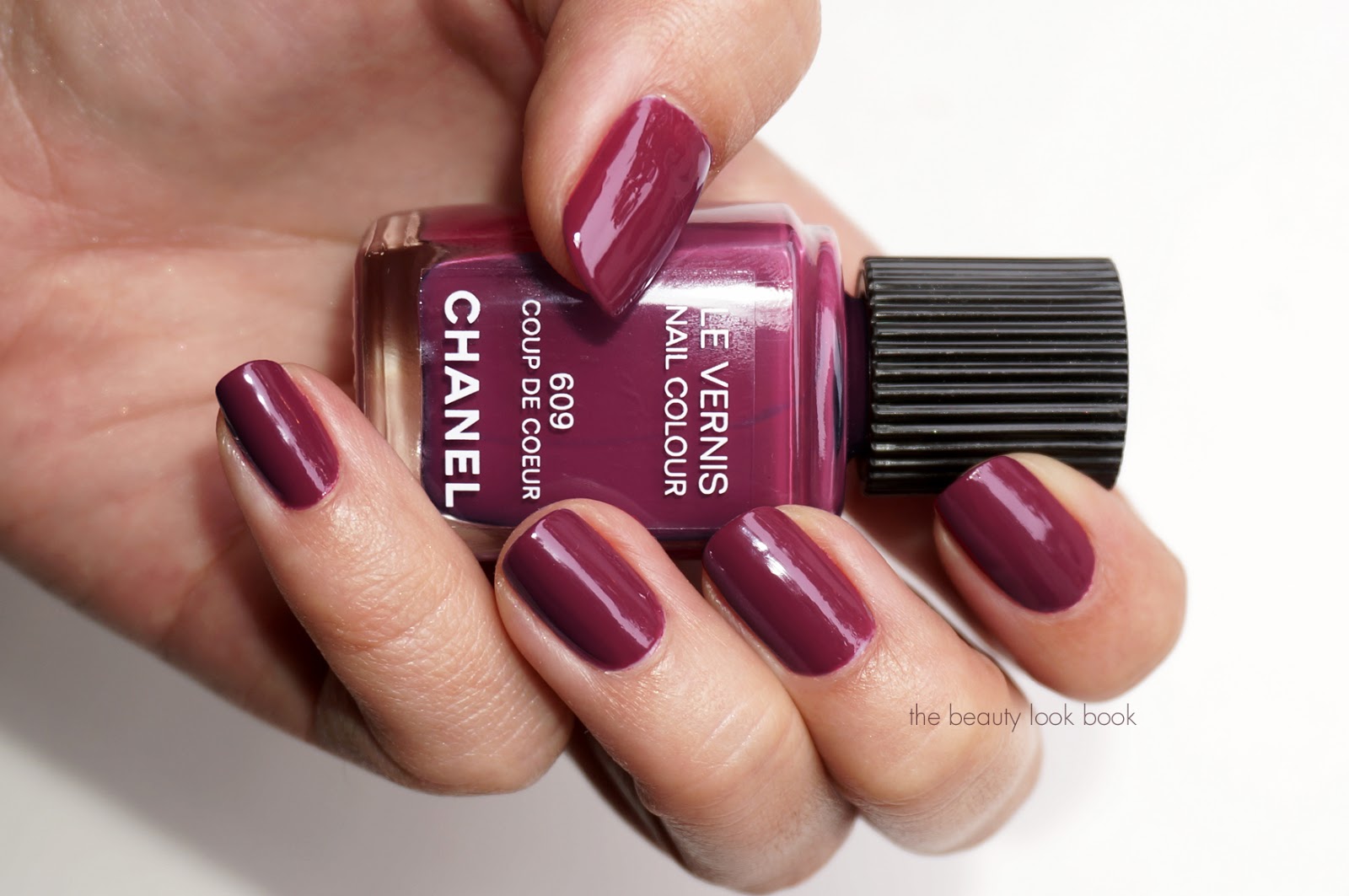 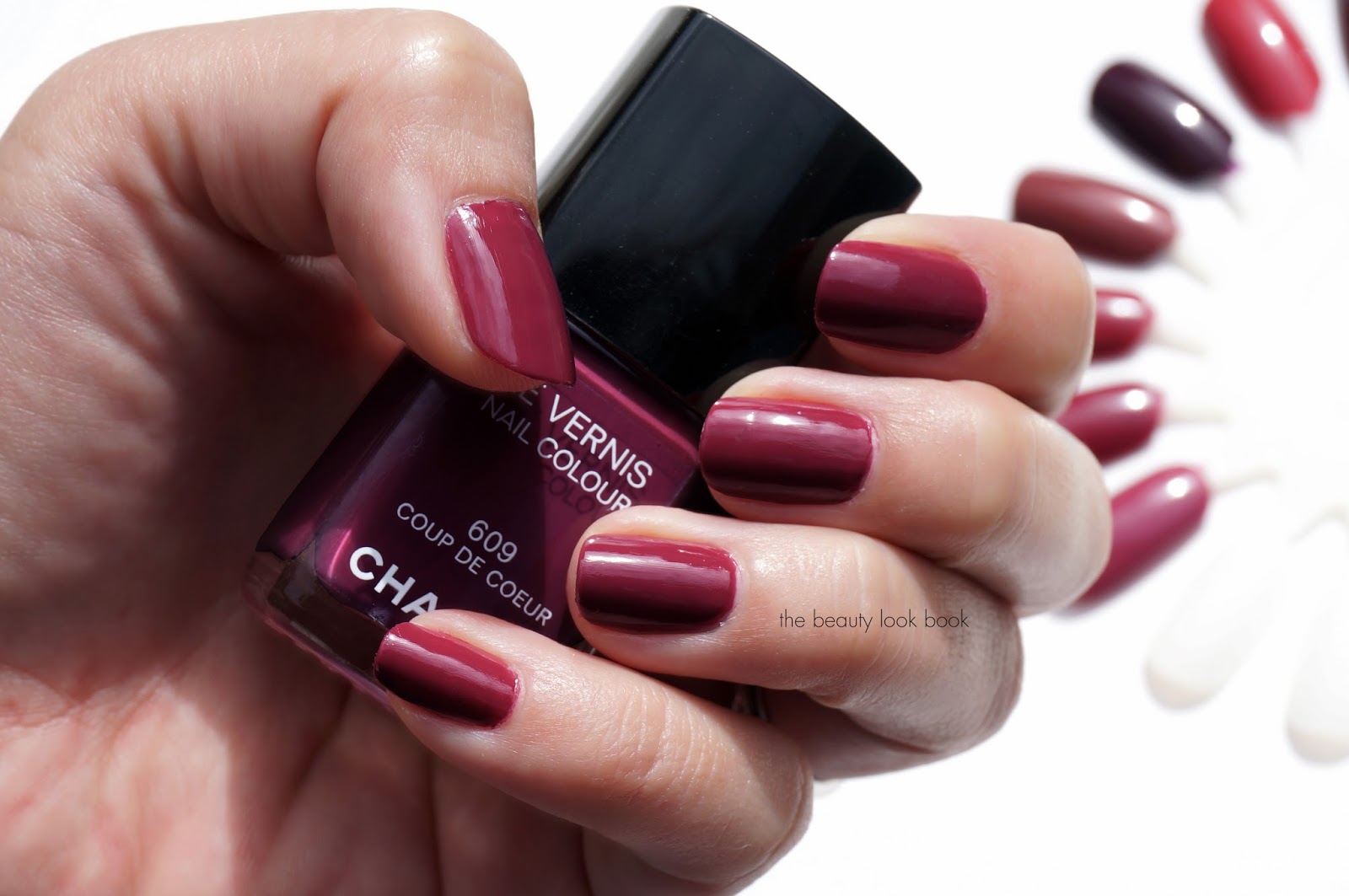 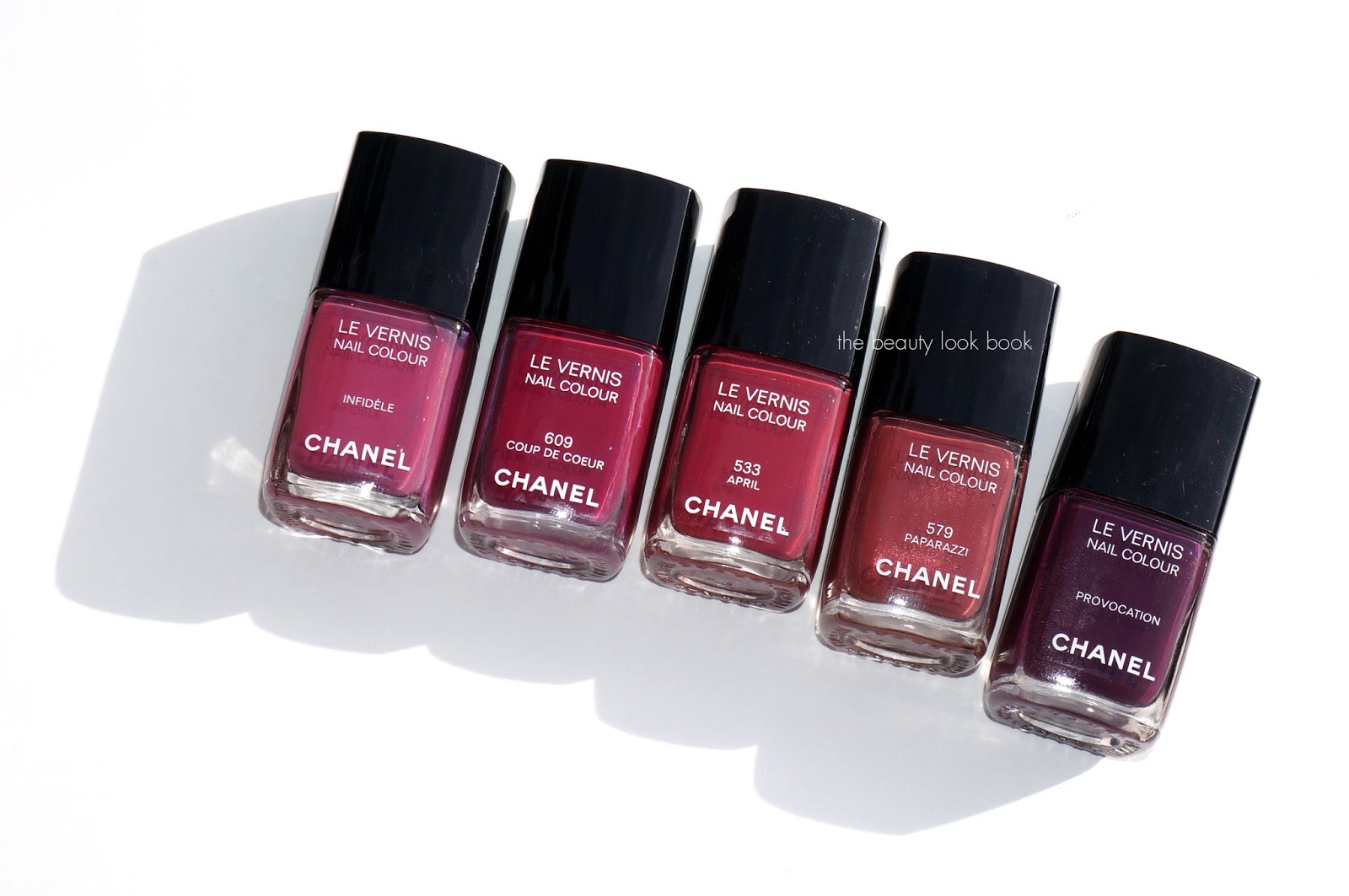 Here you can see all the shades pulling more red in the direct sunlight: Overall Coup de Coeur #609 is a lovely classic plum. It looks very similar to April on the hands, the difference is that April is warmer and more reddish. From arms length I think would not be able to tell the difference.
Coup de Coeur #609 Le Vernis from Chanel retails for $27. I only spotted it at one store last weekend but the collection should arrive at your counters soon. Online now at Nordstrom, Bloomingdales and Saks.
ChanelNail PolishSpring 2014
10 Comments
Share