Chanel summer launched a little over a month ago with their Cruise Collection called Les Indispensables de L’Ete. I’ve been testing these a bit longer than normal as I had such mixed feelings about the products I kept trying to make them work but in the end decided I just could not. I’ve been a long time fan of Chanel and the spring/summer collections are usually my favorite. This launch had a few items that caught my eye so I ordered them sight unseen as most of it didn’t launch in stores until weeks later. I did try the remainder of the items at a counter while I was in New York but did not pick up anything else. Much to my disappointment, out of items I ordered the only things that worked for me were the nail polishes. What I hauled:

Up first are thoughts on the Les Beiges Healthy Glow Luminous Colour, I bought three shades as I found the original Sheer Colour formula ran a bit on the darker side for me.  The new Les Beiges line are powders described as a powder bronzer and highlighter in one with illuminating pigments. They recommend you buy one darker than your skintone to use as a bronzer and one lighter to use as a highlight. The concept sounded promising so I didn’t trying for colors that could be both a highlight or bronzer. The colors ended up swatching a bit lighter on the skin compared to what I saw in the pan. They had an almost creamy feel to the touch yet looked extremely powdery on the skin. There wasn’t enough color or pigment to use as a proper bronzer or highlighter, yet there was too much shimmer to use as a setting powder. I tried it by dusting it all over and it looked way too shimmery all over the face. I tried the deeper color ones at the counter and they looked muddy on my skin. All three shades I bought were a complete miss for me – the product just sat on my skin, even over foundation and or any tinted moisturizer. I couldn’t make these work as a highlight, bronzer or setting powder. I can’t remember the last time I was this disappointed in a makeup product, although I tend to get let down by a lot of mascara formulas. I had high hopes for the lip colors but was also disappointed with the ones I picked. I’ve been a huge fan of the Rouge Coco Shine and Rouge Coco Stylo lip formulas. Something was missing or changed with these. The Rouge Coco Shines in this launch had a sheer streaky finish that didn’t meld well with my lips. Golden Sun is a pretty light orangey gold but on the lips went on streaky. Golden Sand should have been right up my alley but also went on a bit streaky and even though it looked sandy in the tube it went on a bit dead-looking on my lips. The Rouge Coco Stylo in Panorama was a streaky goopy mess upon contact. The color is so pretty but was an utter fail on the lips. It almost disintegrates upon contact and doesn’t apply smoothly or adhere to the lips. Perhaps I got a dud – I can’t believe this would perform that poorly considering I’ve had such great experiences with the other shades. On the left is Rouge Coco Shine in Golden Sun with the Medium Light Les Beiges on the cheeks. It’s hard to tell I have anything on but it just gives my skin a chalky look/finish.

On the right is the Rogue Coco Stylo in Panorama + Medium Les Beiges on the cheeks. This one too is also virtually undetectable but just looks powdery and emphasizes texture on the skin. Top from Nordstrom. 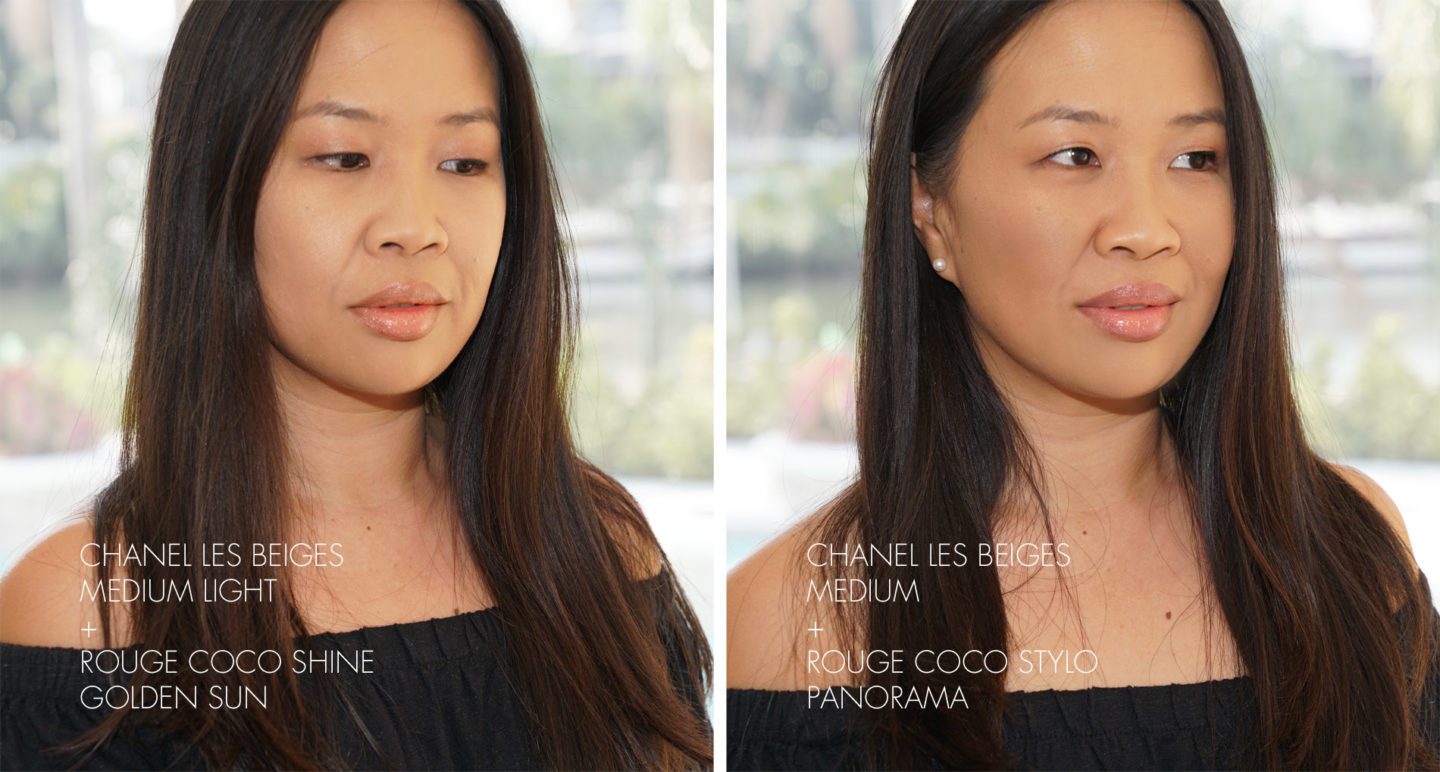 Swatches, all three are listed as limited-edition on Chanel.com: 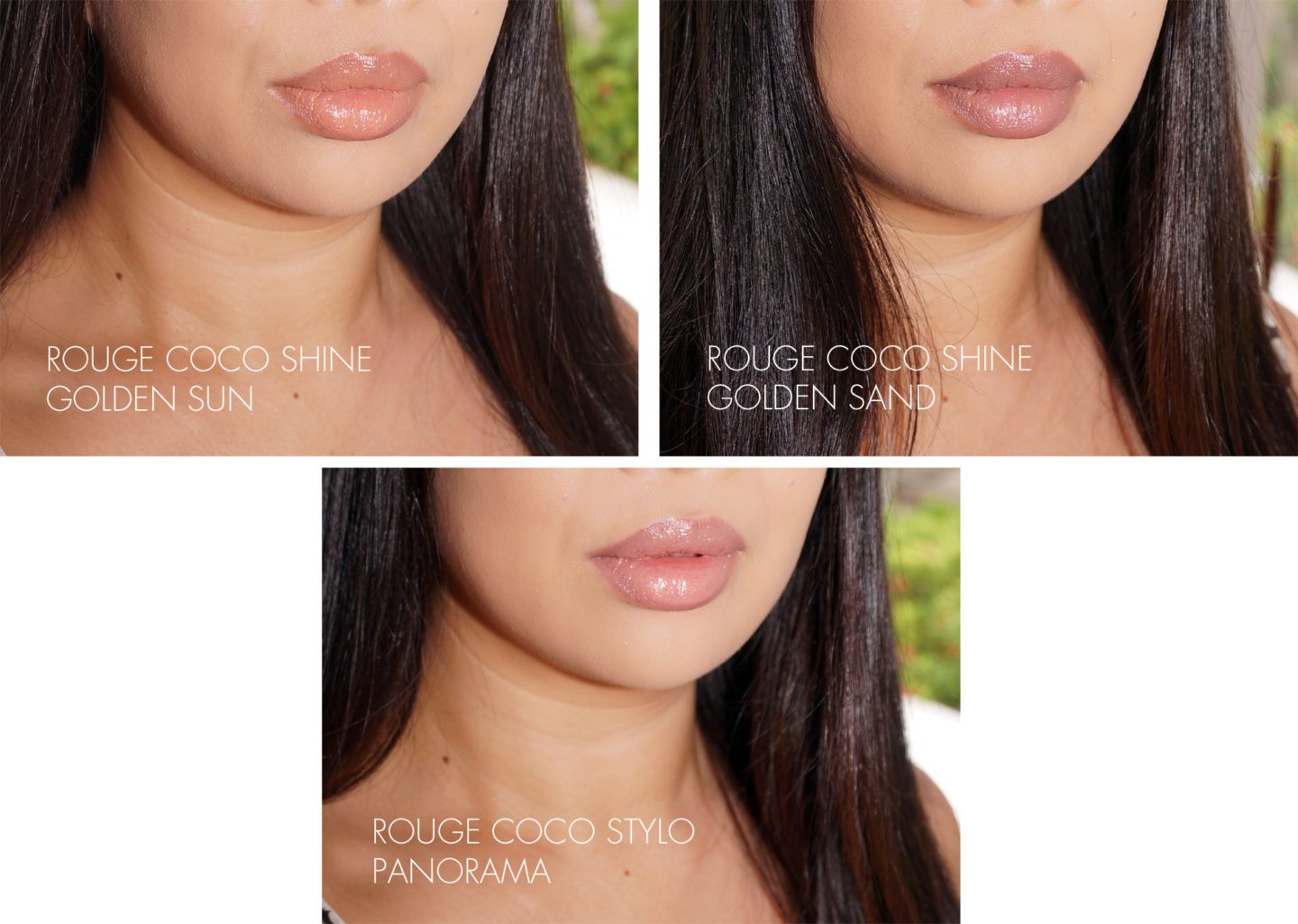 Last we have the four Le Vernis nail polishes. I’m a coral lover so 3 of these were perfect for me. They do have a similar vibe to many older discontinued shades. I think Chanel Coralium is pretty much identical to Dior’s Coral Crush. (Comparison swatches below.) Coquillage is a creamy light orange, Sea Whip is a pretty peach, Coralium is a coral pink, Sargasso is a color I found an odd pick for summer. It’s a very dark green with a hint of shimmer. Right now Coralium is the only one that isn’t listed as limited-edition. Swatches with each color shown with two coats, the pigment is excellent and coverage smooth with these. Swatch comparisons, note that both sets are the same, just with different lighting to try and show the differences in color. Most of these have been discontinued. Colors you can find now include Tulle, Sea Whip, Coralium, Turban, Espadrilles, Aventure and Coral Crush. 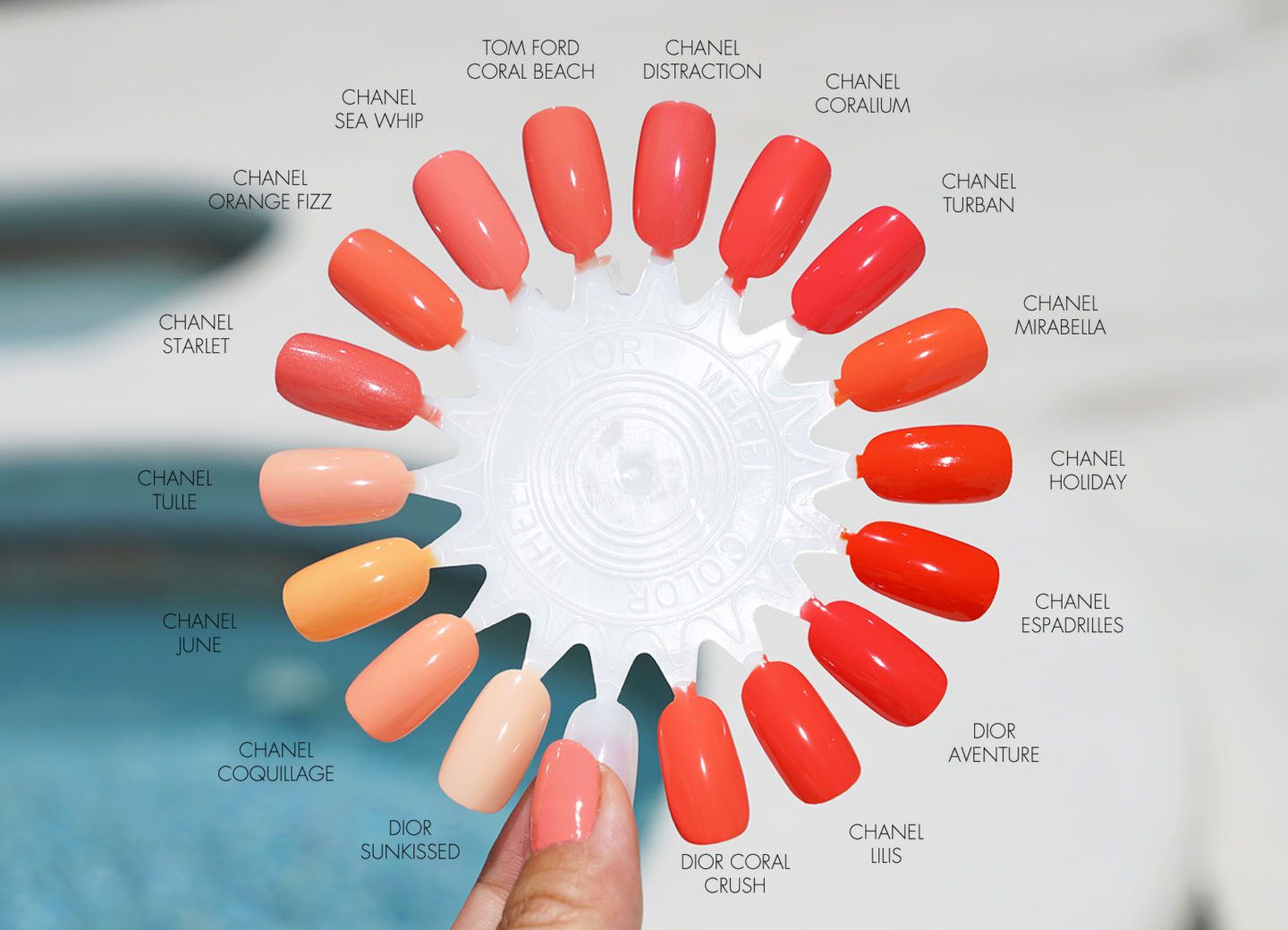 When it comes to buying things sight unseen I think it’s a given that not everything will be a hit. I’ve been lucky so far that I’ve had mostly hits even when I order things without testing first. For the most part I found this collection a miss. By now most of you who are Chanel fans have most likely seen all of these at the stores near you. If you’ve tried it I’d love to hear your thoughts. Any ideas on how you’ve been using the powders would be great to read about for me. The lip items are just not workable for me color-wise or formula-wise, but I have plenty of other lip items to keep me busy for a very long time.

You can find the Chanel Cruise collection online and in stores now. I ordered my items from Chanel.com and Nordstrom.

P.S. I’ve finally revamped my blog newsletter thanks to Chloedigital! You can subscribe here. If you’re already subscribed the default is the daily/new post notifications. If you’d prefer to change e-mails to weekly you can now change it 🙂 Link is also on the top header! 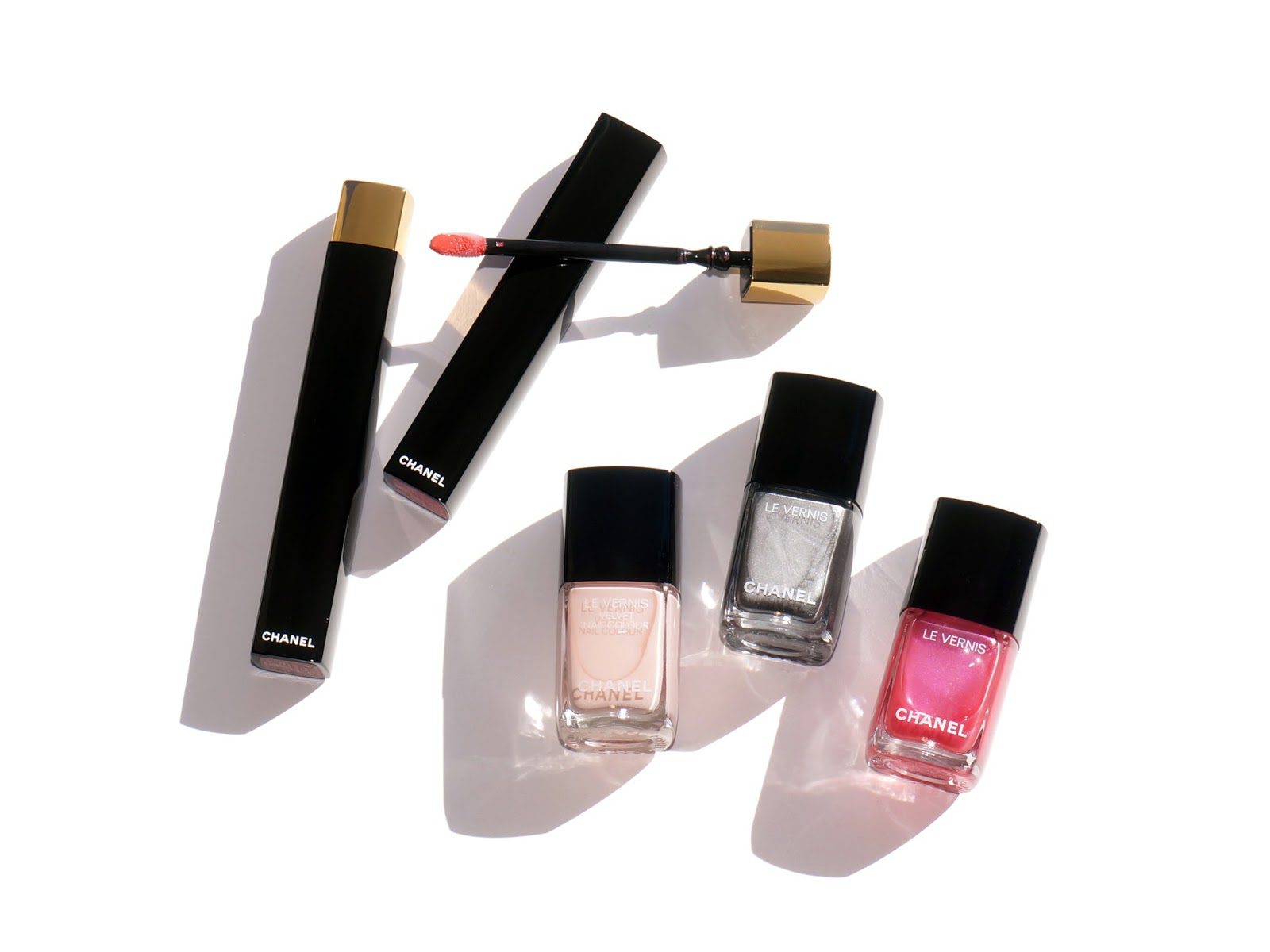