MAC Work It Out, Eyes on MAC and Studio Quiktrik Sticks MAC has some new collections that recently launched and I have a roundup of a few items from the Work It Out, Eyes on MAC and Quiktrik Stick launches. There are several items I’ve fallen head over heels in love with that are not to be missed – in particular the In the Flesh Eyeshadow Palette and Prep + Prime Fix+ Minis that are scented. I’ve split a few items by category with overlapping collections so here are a few notes on each launch:

Up first are my favorite items the Prep + Prime Fix+ Minis that are scented. I’ve featured these on social and here recently, there are 3 scents in Coconut, Lavender and Rose. I bought backups of all of these as they’re limited-edition and I think these will be perfect for travel. They have a nice light but noticeable scent. I love to use these as setting sprays. Next are the lip items from the Work It Out Collection. I tried out two of the Lustre Lipsticks (which is my favorite formula) in Muscu-linity which is a sheer pale beige and Testosterone which is a sheer coral. Both have a tiny bit of shimmer in them and they give the lips a glossy sheen. There is a new gloss called Crystal Glaze Gloss – these are on the sheer side. Nice Cheeks is a pretty beige but pretty much goes on clear on my pigmented lips. Ripped is a sheer red which gives the lips a healthy tint. These have that signature vanilla scent that MAC has in their lip products. Texture is on the medium thick side but not sticky. Given the vast number of glosses I have, had I been able to pick colors I would have probably skipped Nice Cheeks and opted for a deeper or brighter shade (these were press samples). 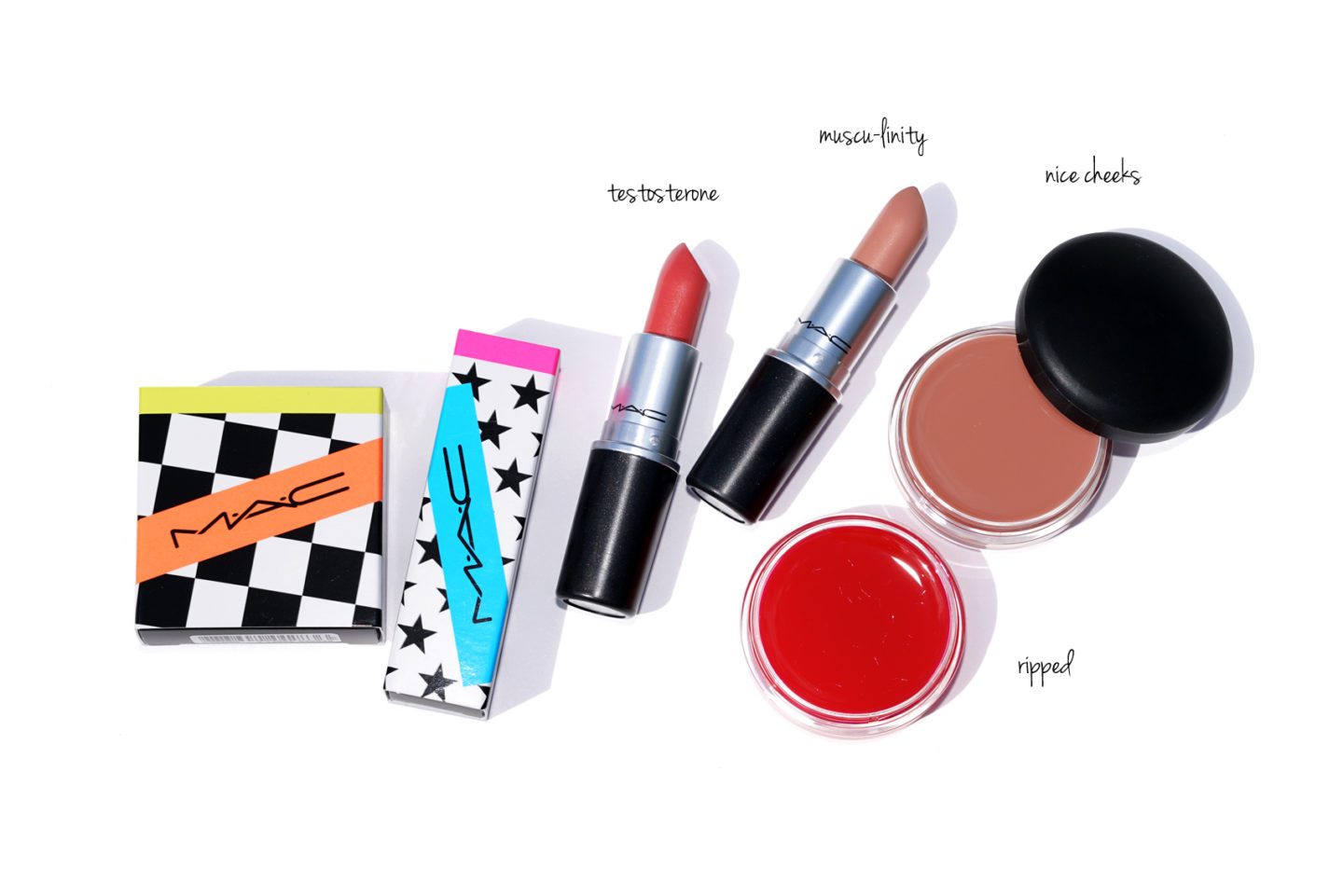 For the eyes, In the Flesh has a really pretty mix of satin, shimmer and mattes. There are 15 shades of neutrals – all of which are soft, easy to blend and well pigmented. The only color I have trouble with is Carbon which I usually do in all palettes. It’s prone to some fall out and requires a detail brush to apply otherwise it’s a chalky mess. I ordered it sight unseen and love it.

For the Eye Shadow x9 I bought Solar Glow sight unseen as well. I swatched the top two shades and found them to be extra sparkly and glittery and knew right away it was not for me so it’s going to be gifted to a friend so the rest of the palette isn’t going to be swatched on the blog.

For the Work It Out Collection there are a number of In Extreme Dimension Lash Mascaras launched in bright colors. I received a mix of the fun shades but as I only wear black, brown or plum the only one I tested was the brown one Squat It, Sugar. I think this is my first time testing this formula and it far exceeded my expectations. It defines, volumizes and holds the curl. The biggest plus for me is that it doesn’t smudge. I do wish it had a tiny bit more volume with one coat – but having to do multiple coats isn’t a deal breaker. As long as it holds the curl and doesn’t smudge – it’s a winner for me. Last but not least are the MAC Studio Quiktrik Sticks. Some shades were repromoted with the Work It Out collection and I had a few from the original launch (I think they launched last year). These are double-ended cream blush sticks. On the hand and arm they swatch to a dewy glossy finish but on the face they aren’t as dewy. I really like these because they’re easy to blend and give a natural wash of color on the cheeks. Even though they are creams I’ve found they last a long time for a cream product. They give the skin a nice glow without settling into lines, they don’t look too frosted or shimmery and they won’t remove the base makeup if you apply on top of powder/foundation and blend. I prefer this formula to NARS Multiples and Armani Fluid Sheers for finish and also lasting power.

I like that they’re convenient in a twist up stick form, easy to blend and the colors can’t be beat. I need to check out some of the darker shades the next time I’m at the MAC store. At the moment I don’t have a favorite color – they’re all good although the Softly Does It / Tight and Tawny is probably the easiest to dupe. That wraps it up for a little MAC roundup. I’m always amazed at how innovative MAC is – no matter how much makeup is out there, they always seem to be able to come up with something new and fun. Three things I think you should check out from these launches are the In the Flesh Palette, Mini Fix+ Sprays and at least one of the Quiktrik Sticks.

You can find these at all MAC stores counters now. I purchased most of my items in store or online at MAC and Nordstrom. Have you checked out these launches yet? What did you think?

Press samples include Muscu-linity, Squat It Sugar, Testosterone, Lavender, Nice Cheeks, Ripped and the Quiktrik Sticks. All other items purchased by me.