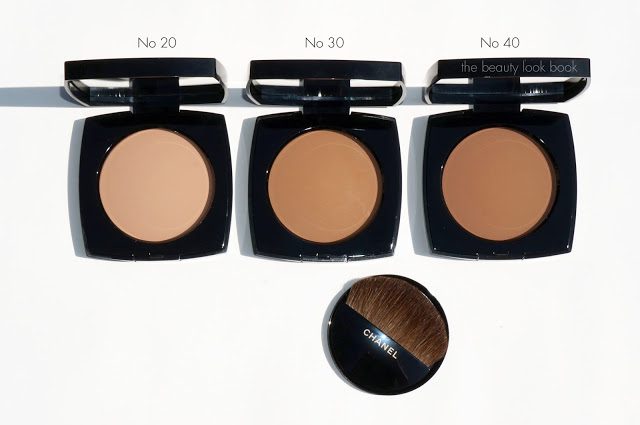 Here are a few comparisons of the new Chanel Les Beiges to some other powders including the Poudre Douce Soft Pressed Powder in Pêche Tendre 20 (discontinued), Double Perfection Lumèire in 20 Beige and MAC Golden Bronzer.

In general the Les Beiges powders are among the sheerest of the sheer when it comes to pressed powders. They aren’t quite as sheer as MAC Blot Powders though (which I always found chalky-looking). You can definitely layer the Les Beiges over tinted moisturizers or foundations. Buffing in a circular motion with a denser brush helps build color.

I would say the Les Beiges are most similar in concept to the discontinued Poudre Douce Soft Pressed Powders even though these only came in lighter shades. Pêche Tendre 20 (no longer available in the US) has a more glowy finish with visible shimmer. Les Beiges No. 20 has no visible shimmer and goes on the skin more pinkish.

Below you can see that the Double Perfection Lumiere in 20 Beige has significantly more coverage than the Les Beiges powders and that in general the darker Les Beiges powders are quite a bit warmer in undertone. They aren’t quite as brown as MAC Golden Bronzer (which also has more of a glow at a cheaper price) but Les Beiges have a similar natural finish. Close up of the lighter shades: Right now my favorite finishing powders are tied between NARS Light Reflecting Loose Powder (I haven’t tried the pressed) and Dolce & Gabbana’s Powder Foundation (I currently mix 100 and 140). Chanel Double Perfection used to be a favorite before they reformulated to the current Double Perfection Lumiere formula.
The more I use the Les Beiges the more I like them. My initial thoughts were slightly less than impressed due to the sheerness. I’ve found that buffing in a circular motion creates a nice glow – something definitely more natural and suited to my preference than mineral powder foundations (pressed or loose), but similar in result by blending out imperfections (only when layered over liquid foundations though for me).

You can find Les Beiges now at Nordstrom.