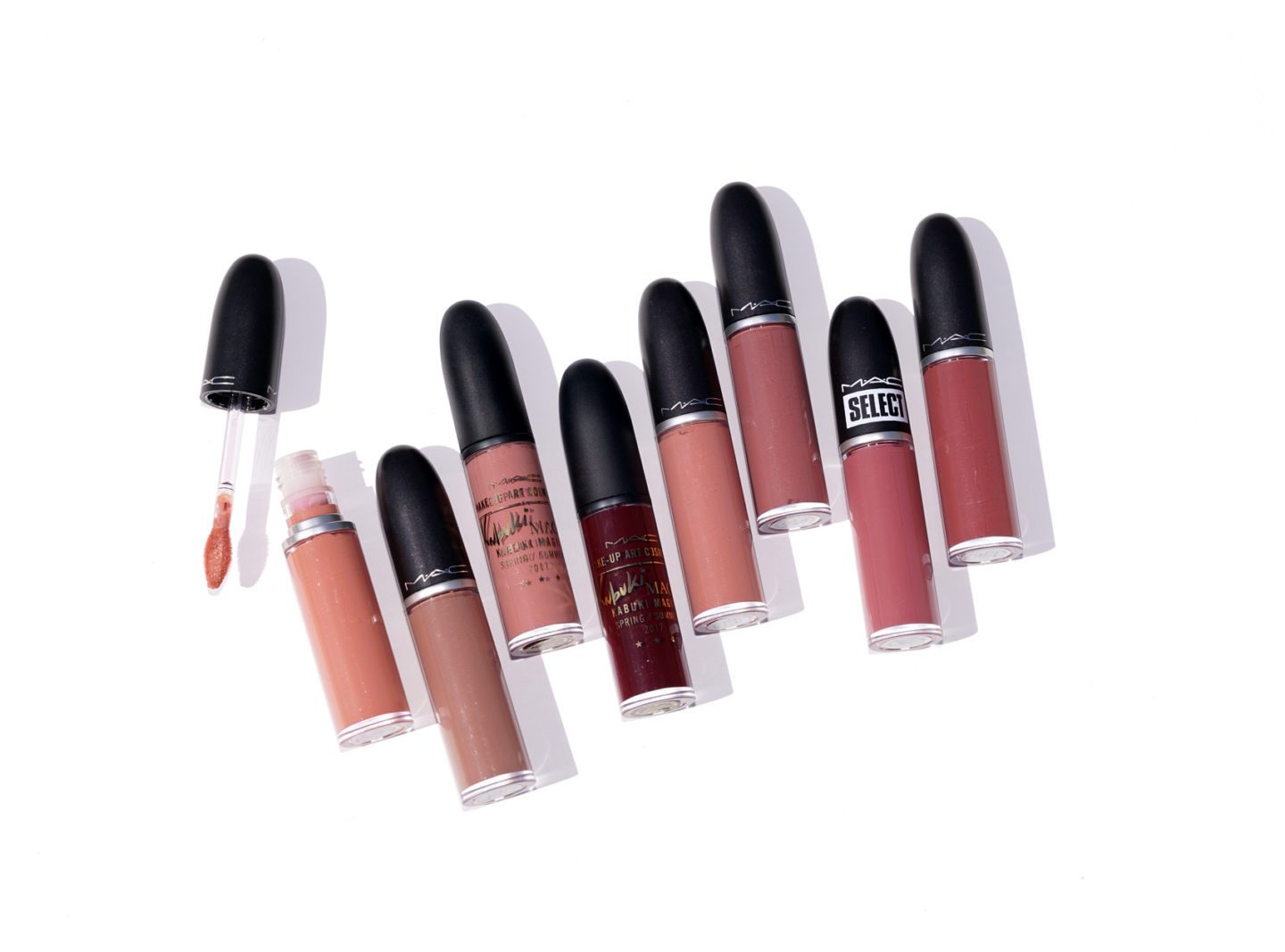 By popular request I’m continuing my series on liquid lipsticks and many of you have asked about my thoughts about the MAC Retro Matte Liquid Lipcolours ($21 each). This formula has been out for a while but I never tried it until MAC repromoted the formula with their recent Retro Matte Collection. I have a mix of colors I received as press samples along with a few colors I ordered myself. As a neutral lip lover I gravitated towards the more conservative shades versus the greys, teals or purples. My experience with liquid lip colors in general is that what I see in the tube or swatch on the hands often times looks different on my lips. The colors shift when they dry down and for some reason my complexion and lip color make the liquids pull differently.

Colors I have swatched for you include: Formula-wise I was relieved to find they did not dry out my lips nor did they make my lips peel the next day. As with most liquid lipsticks they dry to a matte finish and can make the lips look a bit wrinkly. I swatched these on bare lips but for everyday wear I either prep with the MAC Prep and Prime Lip or any lip balm like the Dior Addict Lip Glow Pomade. They add a bit of moisture underneath and make the lips look a bit less textured. They really do last all day – once they dry they stay put and don’t budge. I didn’t get any color transfer to cups once they fully dried. I think the formula is great for the colors I tried (with the exception of Fallen Angel). Still I’m more of a glossy lip person at heart, but for a liquid lip formula I give these a thumbs up. My top three favorite colors are Sweet Thing, Burnt Spice and Preferentially Yours. You can find the MAC Retro Matte Liquid Lip Colors at all MAC counters now. I purchased some colors online at Nordstrom and MAC. Do note that the MAC So Select colors and MAC Make-Up Art Cosmetics Collection colors are exclusive to MAC online and MAC stores.

Have you tried these? What did you think? Any favorite colors?

Preferentially Yours, Lady Be Good, Topped With Brandy purchased by me, all others sent as press samples for review. I’ve been a long-time fan of MAC lipsticks – I still remember the first ones I bought when I was in high school. I had saved up for what seemed like forever to buy a few including Pink Glaze, Wuss and “O” (two of which I think are discontinued now). Many of the formulas are drying for my lips but the colors are so good I just can’t ever resist them. MAC just launched a new program called MAC Select which is exclusive to maccosmetics.com and MAC owned/operated stores. It’s a loyalty program where you receive a unique member ID number that allows you access to certain exclusives, early access and more options for tracking your Back to MAC items. All the details on the program tiers here and FAQs answered here – you can register online (that’s how I signed up) or in MAC stores. To celebrate this launch MAC released a new matte lipstick called So Select ($17 for 3g) which is described as a dirty rose. You have to be a member to be able to purchase it. I have a love/hate relationship with some of the MAC neutrals. Some look so so good swatched on the hand but then on my lips the color looks like death (ie Twig, Spirit, Whirl). Still there are tons of neutral options in almost every imaginable undertone so you’re bound to find one that works.
So Select is indeed a dirty rose color. It’s a neutral that has a slightly deep undertone. It’s exactly what I hoped Kat Von D Everlasting Liquid Lipstick in Lolita would look like on me (which is a bit too dark for my personal taste). I’ve pulled a few other shades to compare it to for reference since with MAC neutrals on a computer screen and also in person, sometimes they can all look the same in the tubes. I’ve found myself really loving So Select – it’s got some brown undertones but not too much that it looks like death, there’s enough rose and pink that gives it a bit of life. A few more shots of the color in different lighting. 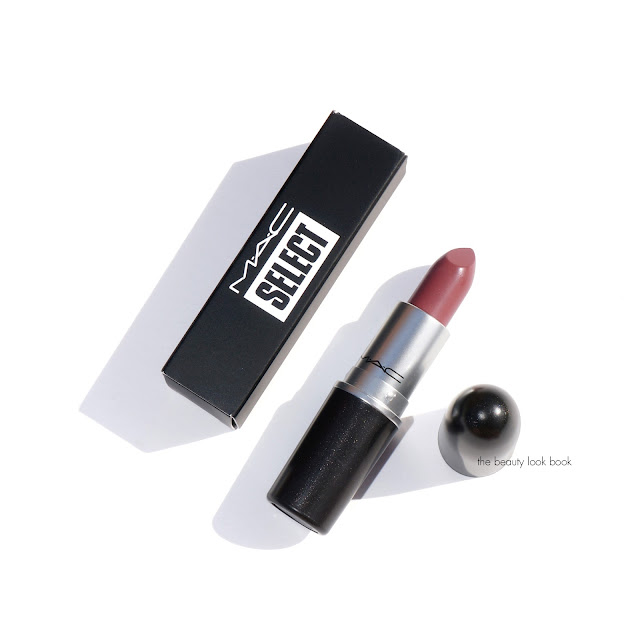 Swatch comparisons to a few other MAC Lipsticks (l to r) Mehr, So Select, Velvet Teddy, Cosmo and Brave, also Kat Von D Lolita shown next to it for reference: I didn’t reswatch KVD Lolita but you can see it lip swatched in this post here, the other MAC lipsticks shown above lip-swatched below: 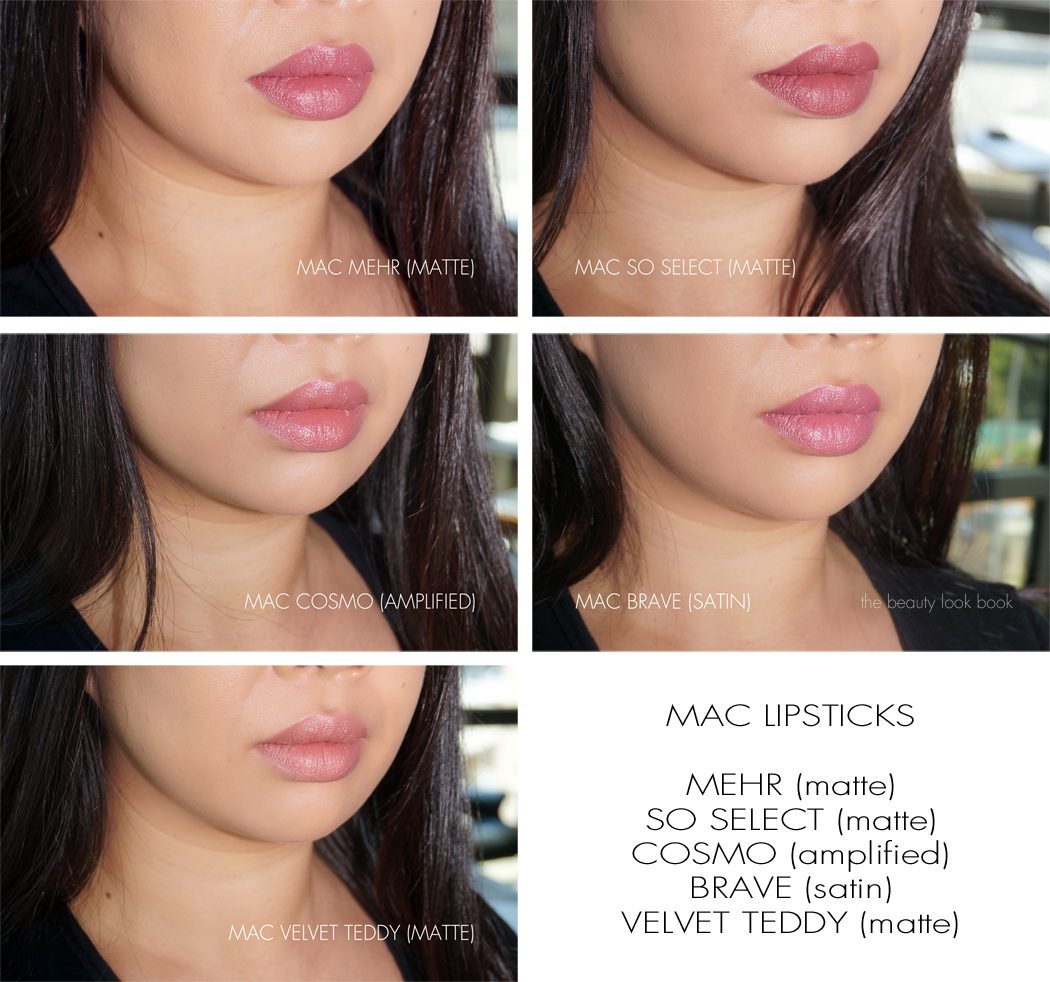 I’m thrilled So Select is a neutral rose-pink-brown that works for my complexion. It’s dark enough on my skin that it’s not quite neutral, but it’s still light enough in color that it doesn’t look too vampy on my lips. As with other MAC Mattes, it has full coverage. If my lips are on the dry side, I do like to prep the lips with the MAC Prep + Prime first. The MAC Select Program applies online and also in MAC stores but I haven’t checked to see if they carry this one (I usually buy MAC products online directly from their website or shop in store at Nordstrom) – if you’ve spotted this in store let me know in the comments.
Bottom line thumbs up! Have you tried this shade yet? What did you think?
24 Comments
Share