I wanted to give an update on my life right now. Thank you to each of you who have messaged me and asked how we are doing. We are all ok: husband, 3 pets, myself and my in-laws. All of us packed up our cars and pets and drove north away from the predicted paths of the hurricane. I skipped my NY plans and stayed in Florida so I could be with my family as there was too much uncertainty about the hurricane and I could not leave them behind with so much unknown.

We evacuated Tampa Bay on Thursday afternoon after the news reported that Hurricane Irma would be a Category 4 Hurricane headed directly towards St. Petersburg – the area where we are currently living. Earlier that week we had been actively tracking the news and alerts by county. We took note of the evacuation notices by zone so we prepared.  My husband and I live on the west side of Tampa Bay in Pinellas County and since we were in a no flood zone we almost decided to stay. Our neighbors had checked in on us multiple times over the week and told us we could stay with them at their warehouse which was concrete and in a no-flood zone. They even gave us the code to their house for us to go inside in the event we had any trouble if we decided to stay.

My in-laws however lived in a mandatory evacuation zone on the other side of the bay so Andrew and I drove to their house and spent two days helping them prepare the house. We boarded the doors and windows. The previous owners of the house were so organized – they had all the boards already prepped, labeled and stored in the garage. They even had an evacuation folder they left for my husband’s parents with detailed diagrams labeled boards. Here is a look at where my in-laws live in one of the canal areas as of Thursday. A lot of the neighborhoods around Tampa Bay look similar to this if they are on the coast or waterfront. This entire area is in Evacuation Zone A. At this time we don’t know what it currently looks like. A couple notes as some of you asked why it was a challenging decision to evacuate and also reasons why so many people stayed behind. Florida has set Evacuation Zones by county. You can see how it’s split on their website. Up until Thursday, unless you were in a mandatory Evacuation Zone (such as this one below) in your county you had little or no direction as to whether an evacuation would be necessary. Zones are primarily set to prepare for hurricane storm surge flooding – it doesn’t take into account possible damage from wind. There are a lot of areas in Florida that are not designated Zone A. Andrew and I were based in Zone D – but it didn’t mean our area could survive hurricane winds. 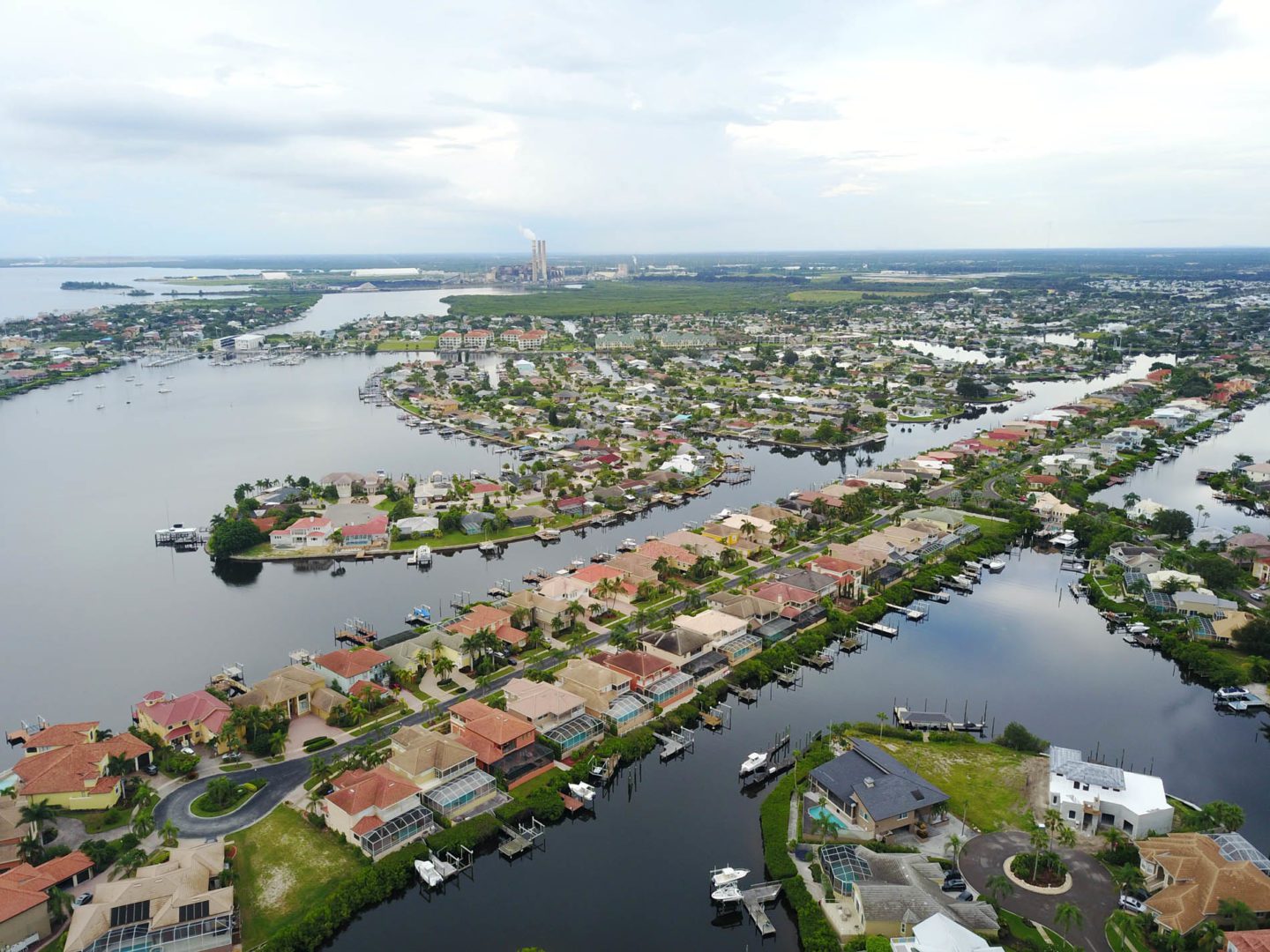 We left Tampa around 4:30 PM on Thursday worried about a number of things including the possibility that the news was over-reacting and that we would be evacuating for no reason, the fact that almost all the gas stations in town were out of gas, the possibility of we might get stuck on the road since news reporters were reporting gridlock traffic with people abandoning their cars on the highways and also worried if we left we might get stuck on the road with high winds. We looked for alternate routes out of the state and downloaded gas station locator apps. While my husband was researching exit routes I packed up two suitcases with essentials, prepped our 3 pets and loaded everything I could into our car. Our in-laws followed too. We all left with our pets packed with us and anything we could fit into our vehicles.

We drove along the 41 north and found there was no traffic and no gridlock like the news had reported. Most people evacuating must have been driving along the 75 instead. Gas was still something we were worried about. We must have passed at least 40 gas stations all of which were closed and out of gas, all with their pumps wrapped with clear plastic wrap. We found 2 that had gas, both of which had at least a quarter mile long wait line of cars and both were completely surrounded with police cars to ensure everything stayed orderly. Luckily we found open gas stations closer to the Florida Georgia border and we had plenty of gas to get us there. Andrew’s brother was texting from San Francisco helping us with directions to ensure we didn’t hit traffic and also gave us addresses of places to check for gas along the way.

Our kitty and Jake below, our other dog Lucy is hiding behind my car seat. We drove to Georgia, stayed the night in Columbus and the entire hotel was filled with Florida evacuees. The next day we drove further north through Tennessee (where I had the best BBQ of my life in Nashville) and ended up in Kentucky to stay with Andrew’s sister’s family. At rest stops it was completely heartbreaking – I heard women on their phones in the bathroom stalls crying saying they were worried that they wouldn’t have a home to go back to.  This morning as I’m typing this I’ve been trying to find news about Tampa Bay updates while sitting in an airport in Louisville waiting to get on a plane for conference in Santa Barbara. At this point we have so many mixed feelings about the entire situation. We felt extreme sadness and guilt leaving Tampa behind worried about everyone who stayed. By now we’ve found the hurricane was downgraded to a tropical storm. We are relieved that most of Florida seems to be ok right now however at the same time both Andrew and I are completely frustrated and angry at the media and news outlets for not providing accurate information, for fixating on small portions of information and blowing them out of proportion. I believe they caused unnecessary mass panic about so many things which led to things such as drinking water shortages at grocery stores, gas shortages everywhere and even traffic jams. At the same time I understand it’s better to be safe than sorry and also know the threat was indeed to be taken seriously. Finding accurate and reliable information all week long has been a challenge. Certain areas were for sure more prone to damage from storms, flooding and winds. I am still glad we evacuated and relieved that impact of everything isn’t as catastrophic as the news had predicted. It’s been an extremely emotional week and even now there is still a lot of uncertainty about what will happen in the upcoming week. My heart goes out to each and every person in Florida.

Thanks to each of you who have messaged me with your concern. I’m touched by all of your comments and kind messages. I’ll be in California most of this week and at the moment am unsure of when I’ll be able to return to Tampa. My husband and pets are safe and sound though and I’ll keep you posted. Beauty posts I had prepared earlier to resume as soon as I can! Packing For a Mini Getaway A Week in Florida