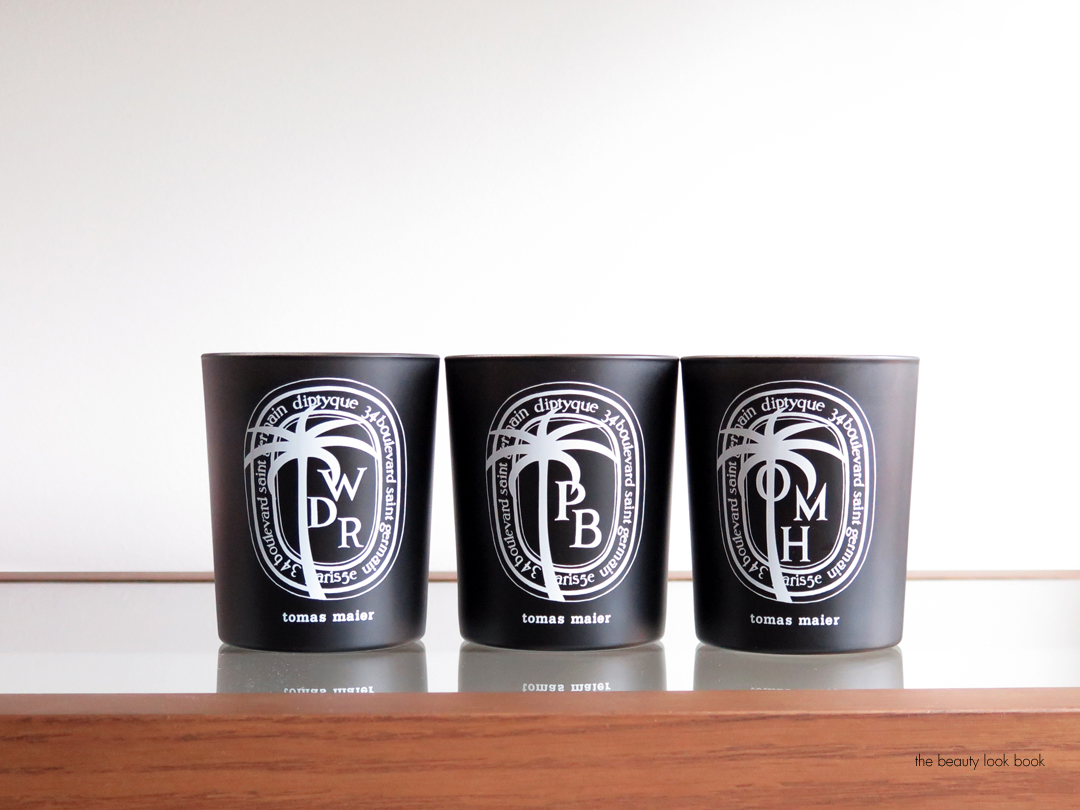 Tomas Maier and Diptyque have partnered on an exclusive collaboration. Their collection features three new candles cased in beautiful matte black glass jars and embossed with white palm trees on the front. The three scents are inspired by places that are meaningful to Tomas Maier which include the barrier island of Palm Beach (PB), a coastal north Atlantic island in Maine, West District Road (WDR), and a bluff top lair at the extreme point of Long Island, Old Montauk Highway (OMH). Each candle retails for $65 and are exclusive to Diptyque Boutiques, Diptyqueparis.com and Tomas Maier stores.

I ordered these a few weeks ago and have been burning each one to test them thoroughly. I’m in love with each one, but my favorite is Palm Beach. Unfortunately these have been released in extremely limited quantities, they are currently sold out on Diptyque’s website and I’ve been told stores have limited stock. If you’ve been contemplating these, I suggest you call your local boutique or the Tomas Maier Madison Ave store (212) 988-8686 sooner than later to see if they have any left in stock (or ask to be put on the waiting list for their next shipment). It always pains me a little to write about something after it’s sold out, but in case you’ve been waiting for my review, here it is.

This is my one favorite of the three and I’ve been burning this one the most. It’s a refreshing mix of citrus and floral, the jasmine and iris are noticeable but the lemon/lime addition dominates it very uplifting. The salt helps balance out the fragrance preventing it from being too sweet or floral. The throw is medium on this one, it’s not super strong or overpowering, but I’ve found it to be just right. 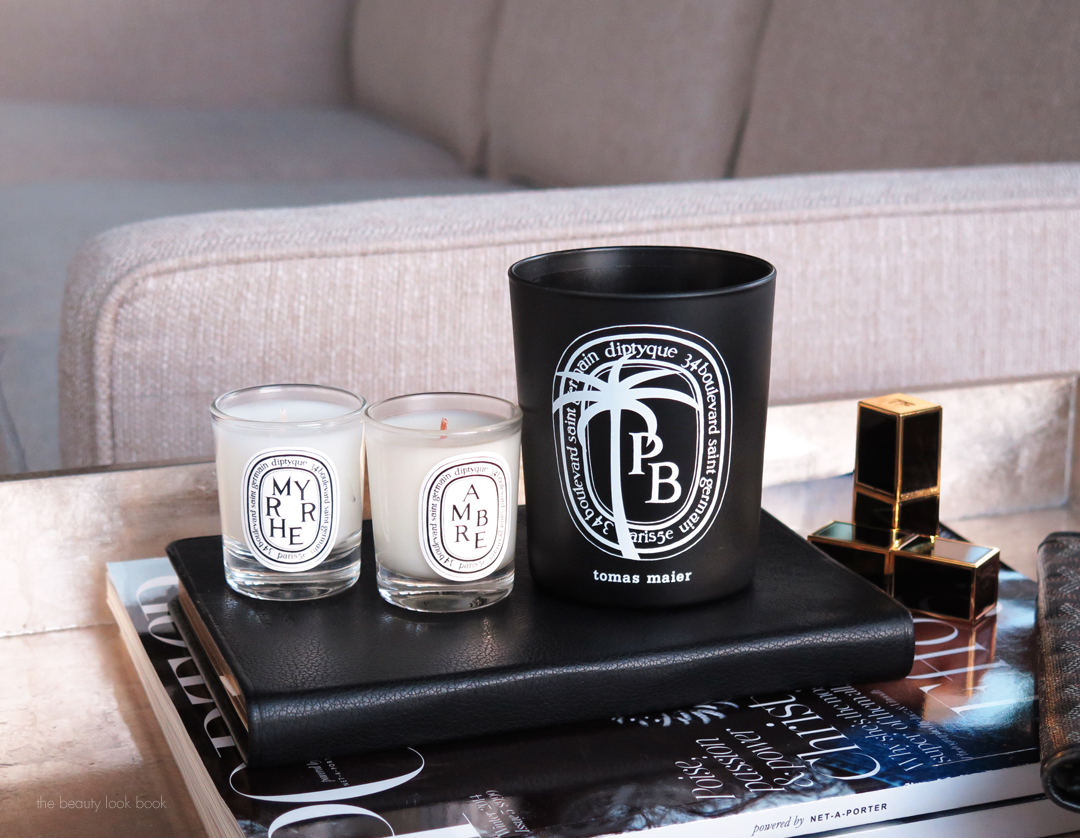 West District Road “WDR”  is described as: dry, northern, still, woods, reminiscent of the scents on a saltwater farm of a Northern Atlantic island plush with ferns, fir and birch trees, hay, wild iris and meadow rose, moss and sea mist
There is something raw, green and very much sea-like about this candle. It’s not quite a pure woodsy fragrance, but it’s has that woodsy feel. It’s an earthy green, you can definitely smell the mix of ferns and fir trees inside. The addition of iris and rose soften it up so it’s not too earthy. It burns with a very clean feel. Throw on this is very strong. 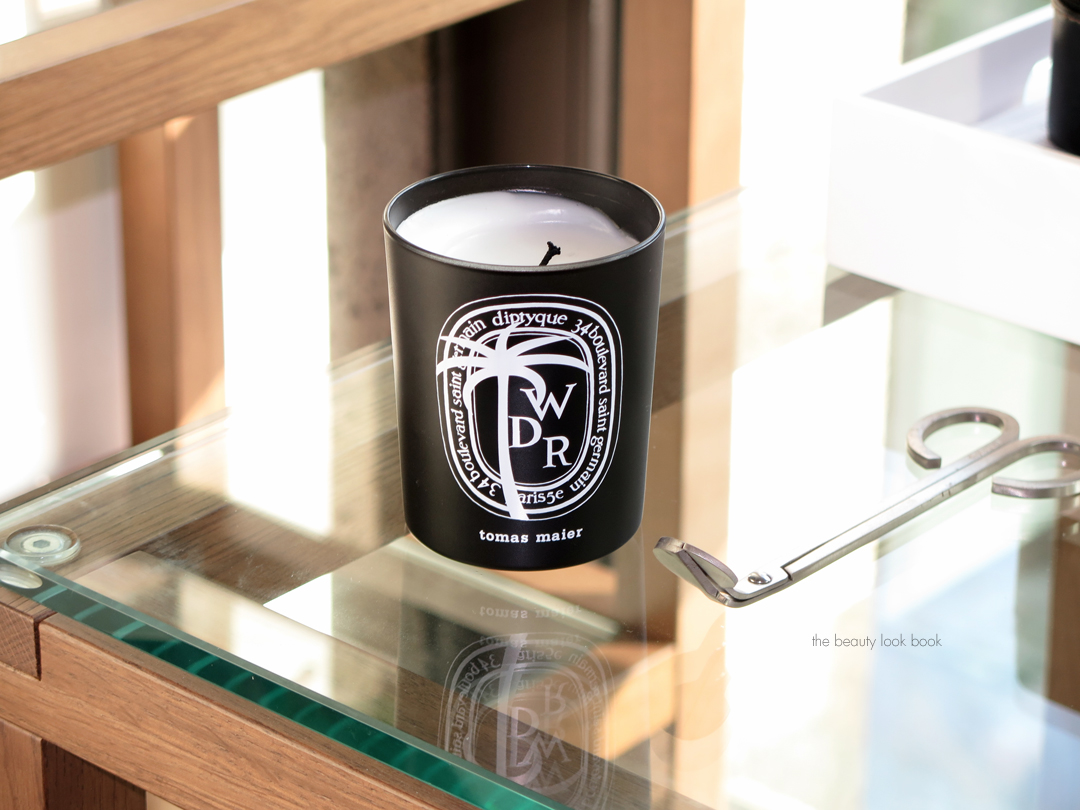 Old Montauk Highway “OMH” is described as: moist, heather dunes, windswept, on a bluff high above the roaring Atlantic Ocean featuring scents of lady slipper orchids, black pine, bayberry, heather misted by the salty ocean breeze
This one has a smokey vibe. It has an interesting hint of heather and orchid, but smells like firewood that is lighter with a hint of salt and florals and green mixed in. I find this one to be the most masculine out of the three, but it burns clean and is still more of a unisex kind of home fragrance. If you like girly scents for the home, this one might not be the one for you. However, if you like scents along the lines of Feu de Bois but want something lighter and not as woodsy, this one is perfect. Throw on this is medium-strong. I ordered my candles from Diptyque at South Coast Plaza and a few more online at Diptyque for Black Friday. Stores received a very limited amount and the website is currently sold out of all three. You might want to call your local stores sooner than later. If they have a waiting list I highly recommend it.
Also if you’re near a Diptyque store, I’d recommend calling to check out if they are having a holiday event soon. South Coast Plaza has theirs this Thursday December 11th from 6 to 9 PM. Call them at (714) 850-9995 to RSVP, ask for Raven or Noa. (As of yesterday, they were sold out of PB, but still have the others WDR and OMH available.)
Have you checked out the Diptyque + Tomas Maier collection yet? What did you think? Which one is your favorite?
8 Comments
Share